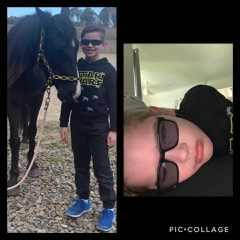 Michael is a bright and bubbly 8yr old. Unfortunately he has been through more than most in his short 8yrs and has multiple diagnosis to show for it including ASD lvl 3, ADHD, Severe Anxiety, Selective Mutism, IBS, Ehlers Danlos Syndrome Hypermobility Type, Dysautonomia, Heat Intolerance, Chronic Fatigue, Pes plano-valgus. Hallux valgus, Pectum excavatum, Lack of endurance, Migraines, Chronic constipation/encopresis, Psychosocial aspects associated with long standing symptoms, Enuresis, Urinary incontinence, Pragmatic and Expressive Language Disorder. He also suffers from frequent daily joint subluxations and is housebound majority of the time to ensure a temperature controlled environment which has become extremely socially isolating for him, his siblings and myself.

Michael is severely disabled and has been diagnosed with level 3 Autism and ADHD. This affects his daily life in every area. Michael is unable to function safely without at least one caregiver present at all times. His functional capacity affects his communication, social interaction, mobility, learning, self management and self-care.

Michael experiences severe sensory issues, working memory difficulties, emotional regulation issues and is unable to perform most daily living tasks independently. Michael’s complex needs carry a significant burden on his single mum Beth, that will not reduce as his age increases. He can’t take care of himself – for example, he can’t make something to eat.

Michael seeks and avoids sensory input and Michel will often shut down when in environments he isn’t comfortable in (which is pretty much every environment bar home). Michael has limited communication skills which cause him great frustration as he is also overwhelmed by noise, light, touch, taste. e.g., Michael must follow a routine to feel comfortable and safe. His paediatric development profile suggests he has not yet achieved the milestones expected of his age in social and emotional play, movement, cognitive, language and sensory domains.
.
Michael is not totally aware of himself or others when outside the home, he is unable to be left alone at all. Due to Michael’s disabilities and his limitations, there is a need to keep Michael safe when inside and outside the home. Michael is at high risk of regression with his daily function due to a combination of his disabilities and the fact all his siblings have been diagnosed with some level of Autism as well as a multitude of other disabilities and this has an enormous impact on
Michael’s life.

This also results in an extreme intolerance to heat and Michael experiences extreme temperature dysregulation
which, when combined with his chronic fatigue, leads to disengagement with all aspects of life in as he struggles to function even on a basic level. Michael has been enrolled in distance education as he is unable to attend his current school at this point, as they don’t have the appropriate facilities to ensure Michael’s health is not at risk. i.e., air conditioning in every room and schooling at home ensures we don’t see further regression as a result. As a result of this diagnosis Michael is only able to participate in short sessions outside, these being during the cooler months or occasionally during early morning/late nights. This, alongside the fact his siblings require 1:1 attention, makes participation in community activities very difficult.

Michael has also been diagnosed with chronic fatigue and suffers from extreme fatigue levels, which
leads to episodes of depression. He is being treated for depression by his Psychologist, where strategies are
introduced to help Michael cope with the problems associated with chronic fatigue syndrome. He also suffers from ongoing migraines, which are triggered by light, stress and excess joint movement or subluxations and can last from a few hours to a multiple days.

Dysautonomia is a condition in which Michael’s autonomic nervous system (ANS) does not work properly. The functioning of Michael’s heart, bladder, intestines, sweat glands, pupils, and blood vessels are affected. Michael needs regular appointments with medical specialist to manage this condition as well as a temperature-controlled environment.

Due to his inability to communicate and self-regulate, his actions can sometimes appear immature and cause increased risks to himself and others. Michael exhibits a pattern of behaviour in home that is significantly impacting on Michael’s social and educational performance. Michael is unable to control behavioural responses to emotions/anxiety, with
frequent externalising behaviours. Michael has significant avoidance of perceived stressors – refusing to leave the house, engage in learning activities or to follow simple requests of routines.

Michael gets frustrated as he can’t always verbally communicate his needs and as a results struggles to control his environment even with basic yes or no questions/answers, e.g. Michael can’t let ne know if he has a headache or if he’s
upset. This causes a lot of ongoing frustration for Michael.

Given all this Michael is still a happy 8yr old who although heavily reliant on those around him for majority of his day takes everything in his stride and never gives up.
Michael has a great team around him that consist of support workers, rhuematologists, phsychiatrists, physcologists, OT, Speech, Physio, Social Worker and more. Even still, for us to be able to provide Michael with an assistance dog will give him the ultimate life changing gift that will offer the support, skills, and the comfort he requires to grow and thrive. It will give him the opportunity to build his confidence, independence, self-esteem, safety, and overall wellbeing and most of all it will help reduce his anxiety and increase his ability to feel safe when it comes to leaving the house.
We thank you from the bottom of our hearts, and will be forever grateful for your love, support, and kindness.

Every donation adds up to make a big difference! You are part of an incredible community of loyal supporters, who together help to make great things possible from what are often small beginnings. Thank you for your donation! All donations over $2 are tax deductible. Thank you for your suppawt.