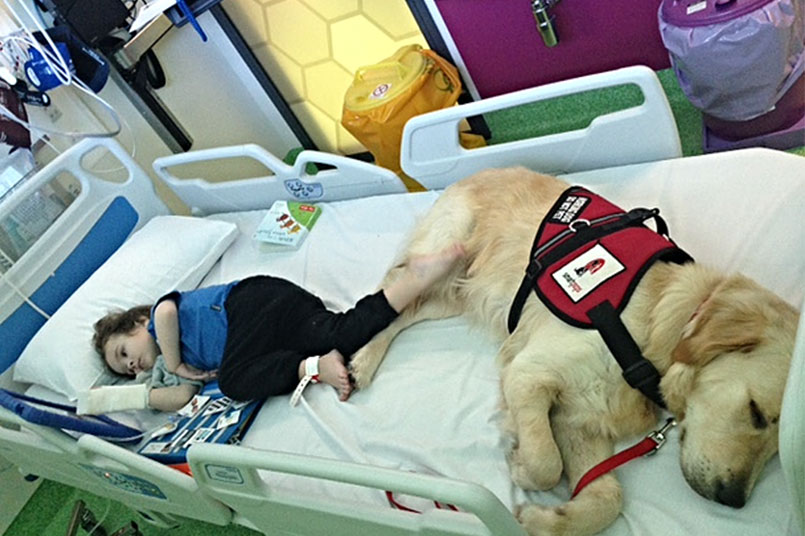 Within two months of being united with his Smart Pup, Kai Oliver had formed an inseparable bond with Chevy and had made amazing progress with his autism-related issues. Chevy is a loveable, easygoing Golden Retriever who was selected for Kai as he is not only an ideal companion for the delightful four-year old but also very strong. Chevy was also trained to help Kai with the mobility challenges that he faces as a result of his Chronic Multifocal Osteomyelitis (CRMO), a rare bone disease which causes painful bone lesions that flare up periodically.

Since having Chevy by his side, Kai has made a huge amount of progress not only in his day-to-day life but in his development too. Diagnosed as non verbal and non mobile, Kai has come on in leaps and bounds and within two months had learnt five new words, including Chevy of course! Kai is also now able to enjoy family outings and trips to the shops without the worry of bolting into traffic or suffering from anxiety.

It’s not only Kai’s family who has noticed the difference either. Kai has monthly 12-hour hospital appointments that were typically fraught with anxiety. The nurses were amazed that on his first hospital stay with Chevy he was calm, content and didn’t have one meltdown. The smile says it all and the transformation that continues to evolve is a wonderful example of how a Smart Pup can enrich the lives of not only the child but of all those around them.

To see the full story of Kai and Chevy Visit – http://www.autismmum.info/