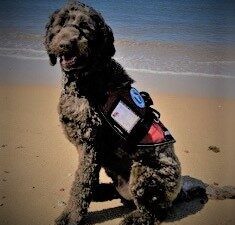 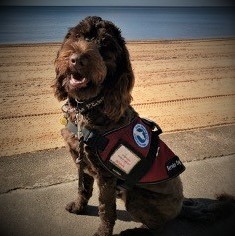 Lynx is a handsome Chocolate and silver Labradoodle. He is very affectionate and forms very strong bonds with he’s special people. He is very vocal (chat) with he’s excitement and anticipation.

Lynx has been trained to public access standards and he loves to work. Lynx enjoys his outings with his people. He has shown sound temperament in all environments such as shopping centres, botanical parks, cafes, and medical appointments. He has a happy demeanour and enthusiasm which is evident in his work and home life.

Lynx has been trained in an Autism assist role. He can aid is disrupting/ redirection meltdowns or assisting in recovery. He loves to give kisses (Nuzzle). He has also been trained to offer sensory pressure with laying he’s body over legs. Lynx can also assist with placing his head on his peoples Lap (for connection and can assist in lowering anxiety). He enjoys retrieving toys and playing fetch.

Lynx can also do a range of tricks such as high 5 & sometimes 10, spin, shake hands, wave and sleep. He can also speak on command. These tricks can be fun to watch and to show others (aiding in social connections).

Lynx has melted many hearts along his journey and has had positive impacts on all those who have had the privilege on working with him. He excelled in the correctional centre program and his special foster families have greatly enjoyed his company over his training period. He has been a favourite amongst the team, and we all look forward to him commencing in his special role and continuing to add value to his special families life on this next journey.