You’re only governed by your imagination (John Phillips) 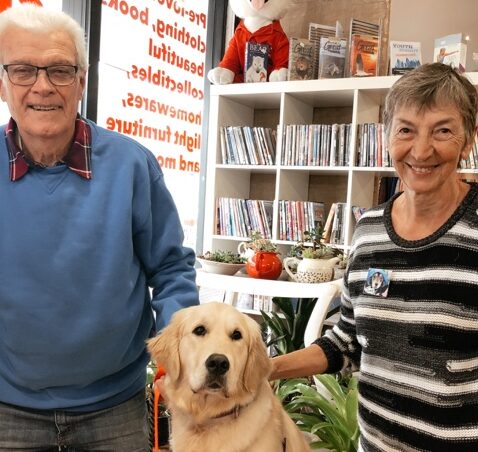 02 Nov You’re only governed by your imagination (John Phillips)

There is, perhaps, no greater thing in this world than to give, to use your skills and creativity to selflessly support others. To be generous – in a world that all too often conditions us into self-prioritizing – is a profound ability that few have.

John and June Phillips are well among that few.

When John and June’s granddaughter began her patient wait for a Smart Pup, John and June commenced their ongoing support for the Smart Pups organization by doing whatever they could to ensure our Charity Shop flourished.

They began with the odd jobs. The jobs that demanded on-the-spot creativity and immense spontaneity. For a fair while, John and June would race around, picking up furniture that people wished to donate to the shop. Amidst our conversation together, they shared yarns with me about those experiences.

A tale that stood out was when John and June rocked up at a three story apartment one afternoon, with the intention of carting away a two seater and a three seater lounge;

‘You’ll get the two-seater in the lift, not the three,’ the donor had said.

At which point June turned to him – determination in her eye – and said ‘Yes, we will!’

And so, they did. 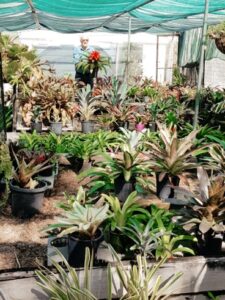 Once John retired from construction, he developed his love and care for plants, specifically; bromeliads (broms). An old friend taught him the ins and outs, including how to replant the pups to create new growth and soon John was ready to foster broms of his own. Then John and June moved from Peregian to Cooroibah, where a property with an enormous greenhouse awaited them. 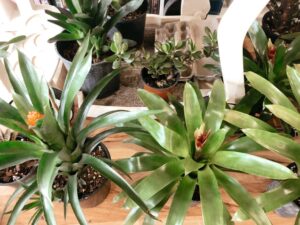 While John spends some of his days in the greenhouse – enveloped by the enchanting colours of bromeliads – finding serenity in the rhythm of replanting broms and caring for the new plants, June is pursuing her own creativity.

An unassumingly brilliant thrift shopper, June spends some of her time browsing garage sale and op-shops often walking away with a modest trinket that many wouldn’t think to use for anything other than its original purpose.

Yet this is where June is vivid. While John drills water holes in the bottom of every abandoned teapot, mug, vase or bowl his wife brings home, June extracts a fully-grown succulent, leaving a couple of leaves to form new growth – and prepares them to fill her newest trinkets. 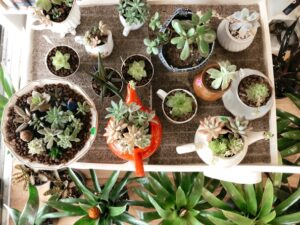 But she doesn’t stop there – June is ingenious beyond measure. She also designs and produces handbags from recycled clothing and linen, makes wonderful hats, as well as sewing vibrant bespoke facemasks.

So then, with a cardboard tray of succulents in unique homewares, a box of handbags, hats and facemasks, and a tray-back full of bromeliads, John and June cart the physicality of their imaginations to our charity shop.

In combining their creative minds and shared dedication to giving, John and June have contributed greatly to making our Charity Shop as flourishing as it is today.

Late last year their granddaughter, Georgia received her smart pup; Thor. June describes their bond as ‘inseparable’, a perfect match. Thor’s ability to grant such protection and happiness to Georgia is something her family is utterly grateful for.

Meeting John and June, and their beautiful dog Tassie, was an honour. Their ceaseless commitment to our Smart Pups Charity Store is beyond appreciated. Our store would be nowhere near as lively and funky, full of colour and beauty, today, if not for these two benevolent hearts in their finest forms. 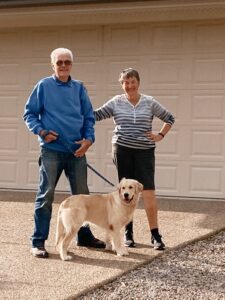 From the bottom of our hearts, we thank you John and June. You help us make a difference.

Written for and on behalf of The Smartpups Charity Shop Team by Dakota Brown.